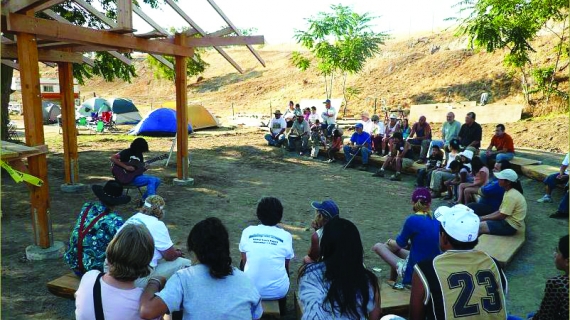 Administrators in the Bellingham, Washington school district realized that a free public education actually came at a price. School supply lists could easily run up a $250 tab at office supply stores; families were tapped for field trip fees, sports uniforms and musical instruments.

And those costs inevitably pinched hardest in the least affluent neighborhoods.

“In terms of haves and have-nots, how some schools have plenty and others struggle…we’d never been able to conquer that,” says Steve Clarke, the district’s assistant superintendent of teaching and learning. “We set out to eliminate the barriers.”

2016: Building on Scaffolds of Hope and Strength

She was wrong. A June 2016 conference, “Beyond Paper Tigers,” drew 250 people—some from as far away as Texas, New Mexico and Tennessee—to sessions on “Why Brain Science Matters,” “The Trouble with Triggers” and “Inside Out: Learning About Emotions.”

In a two-hour partner showcase, representatives of 14 different agencies and organizations answered the question that threaded through the entire two-day event: “What is The Heart of the Matter?”

The one thing Barila regretted was that she hadn’t scheduled a break-out session on how the whole thing came to be.

Barila can’t talk about the first year of the Mobilizing Action for Resilient Communities (MARC) grant—a project that pairs Walla Walla’s CRI with the Whatcom Family and Community Network  (WFCN)—without discussing the scaffolding built long before ACEs became a buzzword.

In Walla Walla, Washington, a banner made by penitentiary inmates stretches across Main Street. One side announces, “October Is Children’s Resilience Month.” The other reads, “Resilience Trumps ACEs.”

For Teri Barila, Coordinator of the Walla Walla Community Network, that 35-foot stretch of cloth is just one of the small ripples that, when added up, create a tide of change across the state.

Barila was struck by hearing Rob Anda, co-investigator of the ACE Study, at a conference in 2007. He told of presenting ACE data at a Congressional hearing and having legislators respond with diffidence: It’s not government’s job to tell parents how to raise their children.

“His next point was: We’re going to make this happen by creating grass-roots initiatives in every community. So go home and make something happen,” Barila recalled. “That’s the message that hit me that day: We are the movement.”

Geoffrey Morgan, former Executive Director of the Whatcom Family & Community Network, had a similar epiphany a few years earlier after hearing Anda’s colleague, Vincent Felitti, discuss ACEs as a public health issue. “This wasn’t new information, but the epidemiological view of it was really different,” he said. “This was a community problem, not a client problem.”