Taking the Pulse of a Growing ACEs Movement

One of the most visible activities was the launch of the PATF’s new website, PhiladelphiaACES.org, which captures the trauma-informed, resilience-building buzz happening across the city and region:

The website, which received more than 700 views in the first month after its August 2016 launch, also reflects what PATF members have learned from other locales in the first year of the Mobilizing Action for Resilient Communities (MARC) project.

“Being part of the bigger MARC community gave us so many more ideas of what to do [with the site],” says Alyson Ferguson, director of grant-making at the Thomas Scattergood Behavioral Health Foundation and one of the Task Force’s staff members. “Being involved in MARC has allowed us to open up some of our original goals and to think about more places we could go.”

The Task Force has continued to grow beyond its initial 20-member group of pediatricians; it now comprises 100 members across eleven different sectors that include physical and behavioral health, education, law and philanthropy. As the group shifted focus from awareness-building toward action, the work groups began to do the heavy lifting, translating the Task Force’s broad vision—to reduce the incidence and impact of ACEs on Philadelphia children, families and communities—into reality.

Inspired by the work of Wisconsin, Washington and other MARC communities that have engaged the business sector, one member of the PATF workforce development group did an ACE presentation for the United Food and Commercial Workers Union. The Health Federation of Philadelphia brought sessions on trauma-informed customer service to frontline employees and managers of the city’s Revenue Department.

Other activities included a collaboration between the Children’s Crisis Treatment Center, Philadelphia University and United Way of Greater Philadelphia and Southern New Jersey. The three entities organized a one-day conference, “The Need for Trauma-Informed Curricula at Institutions of Higher Learning.” At the event, the PATF workforce development group released a toolkit aimed to help faculty in social work, medicine, law, education and counseling weave content on ACEs and trauma-informed care into their graduate program curricula.

The Philadelphia School District has joined the movement, with multiple requests for training and a new coordinator—a position created this past fall—to develop and implement trauma-informed practices across the district’s 214 schools.

“It’s amazing how quickly the word is being spread among teachers and counseling staff,” says Ferguson. “And there’s a groundswell of funders interested in funding trauma-informed programs”—enough that some Task Force members helped create a guide for such funders aimed to explain ACEs science and trauma-informed approaches to social change. 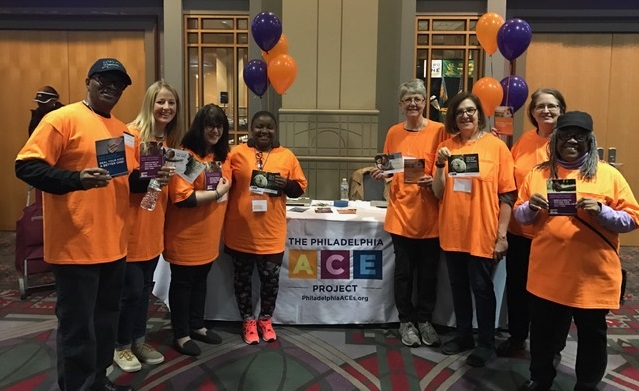 Meantime, the community education/ACEs messaging work group brought together members of the Task Force with community partners, including city block captains, teenagers and parents of young children, to develop effective ways of spreading the word about trauma and resilience.

Outside of the work groups, PATF members continued to pursue the goals of infusing ACE-awareness into education and policy at all levels. PATF co-chair Sandra Bloom and member Roy Wade spoke with staff at the National Board of Medical Examiners, which develops medical licensing exams, about including ACE-related questions in those tests.

And all Task Force members were critical in participating in the network survey from Westat, which confirmed what PATF staff already knew: their network has robust representation from hospitals, research institutions and health care providers. They’d like to include more people who work in child welfare, juvenile justice and immigrant services, as well as city and regional officials from both legislative and executive branches.

“In the upcoming months, we’re going to be thinking about policy and broader systems change,” says Caitlin O’Brien, a PATF staff member and special projects manager at the Scattergood Foundation. “That’s where we’re moving, toward an effort to influence local and state policy-makers.”

With concurrent activities in so many sectors of the city and region, Task Force members have tried to connect the dots. While databases—the online compendium of trauma-informed trainings and the still-in-progress directory of treatment and prevention services—may not be the most glamorous aspect of the ACEs movement, they are essential for linking individuals and agencies with one another and giving them the information they need.

“We’re trying to keep a pulse on what is happening in Philadelphia; we’re hoping it leads to further partnerships between organizations,” Ferguson says.

Being part of the MARC project has also prompted PATF staff to consider the structure and health of the Task Force itself, with questions such as: Should work groups be defined by Task Force staff or members? Should a work group disband when its task is finished? How can the Task Force continue to engage current members and enlist new ones, especially from less-represented sectors?

O’Brien and Ferguson are buoyed by the numerous requests for trauma-informed training in the city, as well as by e-mails from across the five-county region that encompasses southeastern Pennsylvania, New Jersey and Delaware. “People ask, ‘How can we replicate and build on what’s going on in Philly?’” O’Brien says, adding, “Being part of MARC feels like we are part of something larger. The daily grind can sometimes be difficult, but those phone calls and webinars remind us why this movement is so important and that we are not alone.”