“Unite in a Common Cause”: Minnesota Tribal Communities Use NEAR Science to Address Trauma and Promote Healing

As the Minnesota trainers expected—and welcomed—the ACE trainings in tribal settings lasted for hours: multiple generations of people from the White Earth and Fond du Lac communities gathering around simmering Crock-Pots of food, sharing stories, standing in line to talk with the trainers afterward.

Once, a White Earth elder was the only person to show up for a presentation, recalls Linsey McMurrin, Director of Prevention Initiatives and Tribal Projects for FamilyWise Services, the Minnesota chapter of Prevent Child Abuse America.

“He was taking care of grandchildren, and [after the presentation] he said, ‘I keep seeing these cycles repeated in my family. Why is it that we keep struggling with abuse? Why do we have a hard time forming strong attachments? I get it now.’”

McMurrin heads the Tribal NEAR Science and Community Wisdom Project, which began as a partnership between Minnesota Communities Caring for Children (MCCC, which recently merged with FamilyWise) and The Center for Prevention at Blue Cross Blue Shield of Minnesota.

The goal, she says, is to use the science of ACEs and resilience to help tribal communities recognize the long reach of historical trauma, understand current behaviors and habits and develop their own strategies for healing.

“The idea was to build awareness and understanding of the root causes of contemporary issues our tribal communities were facing: health disparities, high rates of substance abuse, disproportionality in the criminal justice system,” McMurrin says. “The chief aim of the project is to move upstream toward prevention and to strengthen our families, doing it in a culturally responsive way.”

The project began in 2015 with a focus on the White Earth Nation and the Fond du Lac Band of Lake Superior Chippewa; it has grown to include the Lower Sioux Indian Community, and currently serves the Bois Forte Band of Chippewa, the Mille Lacs Band of Ojibwe and the Leech Lake Band of Chippewa, McMurrin’s tribal community. The first phase involved ACE Interface trainings—the original curriculum focusing on ten sources of childhood adversity cited in the 1998 ACE Study, expanded with information on historical and collective trauma—arranged through tribal councils or community education programs.

“We’d start with a meal, with relationship-building,” McMurrin says. “We’d plan to be there for 2-3 hours, but it would be more like 4-5. What was important was bringing in the whole picture—not just ACEs, but NEAR science (neuroscience, epigenetics, ACEs and resilience)…to understand that in order to heal, we need to treat the root causes.”

The project’s second phase was to train community members to become ACEs-and-resilience champions—about eight cohorts across all five communities, with approximately 20-30 people trained each time, McMurrin says. Those cohorts included classroom teachers and aides, professionals in behavioral health, managers from local casinos and staff at Boys and Girls Clubs along with tribal healers, elders and community leaders. 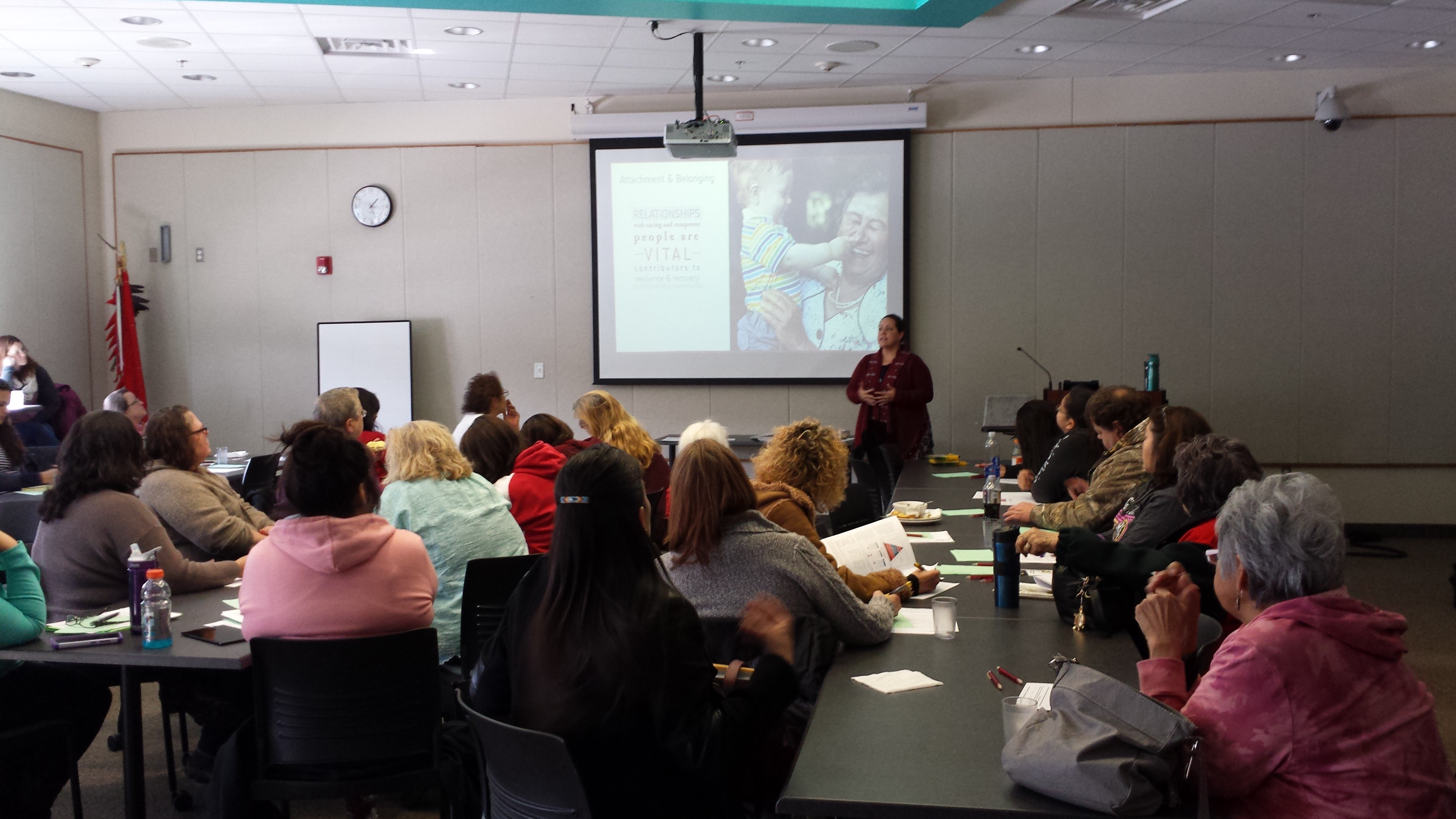 A crucial component of the project is to recognize not only the trauma passed down through generations, but also cross-generational strength, healing practices and cultural wisdom. Project leaders speak of “remembering” and “rebuilding” resilience rather than creating it anew.

“Storytelling and oral tradition are so central to our community,” McMurrin says, and the project aims to “hold up the immense wisdom and expertise, to acknowledge the experience of our community members and to focus on self-efficacy and empowerment.”

In a Center for Prevention at Blue Cross Blue Shield of Minnesota podcast, the Tribal Wisdom Project’s first director, Susan Beaulieu, notes that new research on epigenetics—essentially, how experiences can become encoded in our genes and even be passed on to future generations—gives scientific validation to something tribal communities have long understood.

In community presentations, when McMurrin asks, “What do you know about historical trauma?” the subject quickly turns to boarding schools, where Native children were separated from their families, languages, cultural and spiritual practices—and where, too often, they were physically and emotionally abused.

Tribal members might refer to that painful legacy as “blood memory” or “soul wounds”—“the seven-generation understanding of how we’ve been impacted and how we’re impacting others,” McMurrin says.

In the project’s third phase, each community developed a plan to address a pressing issue. In Leech Lake, the project was a men’s basketball tournament, with t-shirts that read “I Am a Protector,” a local youth group running the concession stand and ACE information available in a casual, interactive format for players and spectators.

The White Earth Nation bought a popcorn machine and organized a series of movie nights—Resilience and Paper Tigers were among the films screened—with social-emotional learning activities for children while their parents watched and discussed the documentaries. 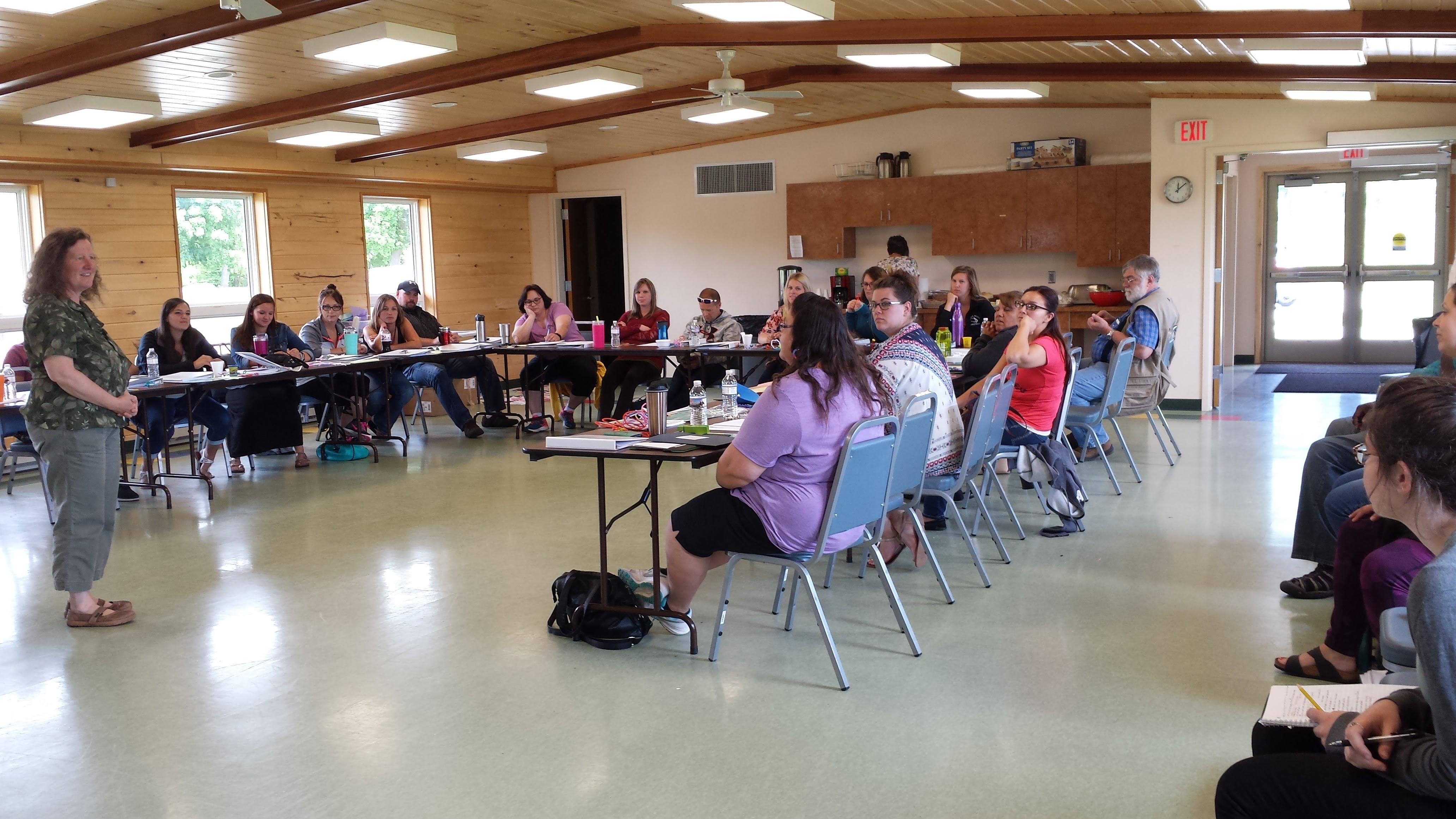 In Fond du Lac, community members worked to incorporate NEAR science presentations into the training regimen for all tribal employees. And the Lower Sioux created a mentoring program that earned MCCC a 2020 Trailblazer Award from Blue Cross Blue Shield.

Another outcome of the Tribal Wisdom Project was a podcast series, Remembering Resilience, with episodes focused on historical trauma, ACEs, epigenetic inheritance and healing. Two episodes featured Native speakers sharing their own stories of resilience.

McMurrin says the nature of community work calls for patience and a long-arc view. “The ebbs and flows, the starts and stops—it can feel a little disheartening. We don’t expect things to change overnight.”

Her work has been personally transformative, she says, shifting her relationships with her children, her partner, even with strangers in grocery stores or irate drivers on the road. And she’s heartened by the ripple-effect of the project: how an “aha” on the part of one elder, one probation officer, one teacher or one young mother can affect scores of others.

“So often you hear, ‘We need to break down the silos,’” McMurrin says. “But in reality, we need silos. People need to focus on what they’re passionate about. What cross-sector work lets us do is unite in a common cause.”