Brad Lohrey, sheriff of Sherman County in Oregon, likes to tell about an older man who summoned an ambulance about once a week, usually in the middle of the night.

When the 911 calls ended abruptly, Lohrey asked his deputies if they knew why. “One of the deputies told me that he started stopping by the gentleman’s house before going off shift. The deputy told me that spending five minutes stopping and talking with the person caused the person to no longer need the ambulance. The gentleman just wanted somebody to talk to.”

For Lohrey, that’s a vivid example of the power of trauma-informed policing, a concept this second-generation sheriff now embraces. Lohrey, a 26-year veteran of law enforcement whose father was also Sherman County’s sheriff, attended a 2016 Trauma and Resiliency Summit at the urging of a member of the Resilience Network of the Gorge, a cross-sector collaboration that grew from MARC funding.

There, Lohrey learned about the Adverse Childhood Experiences study and the long reach of childhood trauma. It changed his mind about policing. “I think the way we do it now is wrong because we just arrest people because we have nothing else in our toolbox to fix the problem,” he said in July 2017. Lohrey began requiring all his deputies to attend at least one MARC-funded training on ACEs, trauma and resilience.

“I learned that there’s factors in people’s lives that [happen] as little kids and are affecting them when they’re 50 years old…We also see that there’s things that happen to law enforcement officers in our careers that affect our behavior as well.”

The same “aha” was happening thousands of miles away in the town of Cicero, which borders several of Chicago’s most violent neighborhoods. Cicero, with a population of about 110,000—mostly Hispanic and working-class—had been a site of brutal gang activity in the early 2000s; the Cicero Community Collaborative worked hard to form partnerships among citizens, educators, social service providers and police to stem the violence.

Their efforts were working: the number of gang shootings dropped from 65 in 2004 to just 4 in 2016. But Vince Acevez, commander of the police department’s gang and narcotics unit, wanted to do more. Along with Jackie Wallen, a school-based counselor, staff member at the youth service organization Youth Crossroads and member of the Illinois ACEs Response Collaborative, Acevez began brainstorming about how to bring trauma-awareness to his colleagues.

Beginning in 2017 and working with groups of 10-12 officers at a time, Wallen and other MARC-connected leaders conducted eight-hour training sessions that covered ACEs, toxic stress and its impact on the brain, epigenetics, trauma-informed policing and the effects of vicarious trauma on first responders themselves.

Before the training, Wallen interviewed more than two dozen officers about specific critical incidents, including a fire several years earlier in which eight people, including a three-day-old infant, died. She made sure that facilitators of the training had local ties; Wallen herself lives in Cicero, and her children go to local schools.

“It wasn’t this fancy expert coming in to talk down to them,” says Jessica Lucas, a senior program manager at United Way of Metro Chicago, which, through the MARC funding, helped support and offer resources to the Cicero Community Collaborative. “It was someone they knew. The history and relationships were already in place.”

And while a few officers initially scoffed at the training, the majority found it to be a transformative experience. “There were a few times officers were tearing up as they were telling their stories. It was very powerful,” Wallen says.

The trauma training spurred more action: the creation of a police wellness committee that includes 20 officers, along with plans for annual mental health check-ups for all police personnel. A planned weekend wellness fair for officers and their families. Discussions about installing a gym in the department for healthy stress reduction.

“The police training has been the spark to fuel a lot of broader steps in the community,” says Wallen. High school security guards, social workers, psychologists and guidance counselors have also received trauma training, and the high school district will focus next year’s in-service workshops on social/emotional learning and trauma support.

As for the police department, Acevez says, “there’s a tough-it-out culture in law enforcement. The other element we deal with is significant resistance to change.” He was surprised to see that response to the trauma training was overwhelmingly positive; 98% of participants rated it “useful to very useful.”

Meg Hefty, associate director of Sarah’s Inn and co-facilitator of the Cicero Community Collaborative who partnered with Wallen to develop and deliver the training, says knowledge of ACEs and trauma is crucial for police. “Trauma experiences inform people’s behaviors,” she says. “If police have a better understanding of that, they can approach from a different angle; they can de-escalate situations and keep everyone safer.”

Trauma-informed policing “makes us more effective,” Acevez agrees. “It helps us form meaningful relationships with the community. Instead of being adversarial, it’s more symbiotic.” 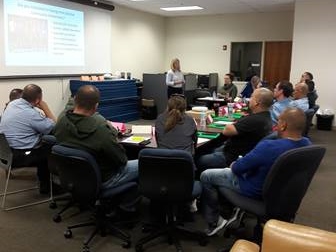