For years, advocates for a statewide children’s mental health system would stand before Iowa legislators and speak passionately about their own particular concerns.

“We were all saying, ‘Throw money at this issue,’” says Chaney Yeast, co-chair of the policy coalition of Central Iowa ACEs 360, a multi-sector network formed in 2012. “That confused legislators; they felt it was this black hole, and they didn’t act.”

This year—thanks in part to connections forged by Iowa ACEs 360—advocates for a comprehensive child behavioral health system told a single story: Children whose mental health needs are met will be more likely to graduate, be employed and become productive members of the community. Current mental health services for children are fragmented and inconsistent. We know what it would take to fix that. 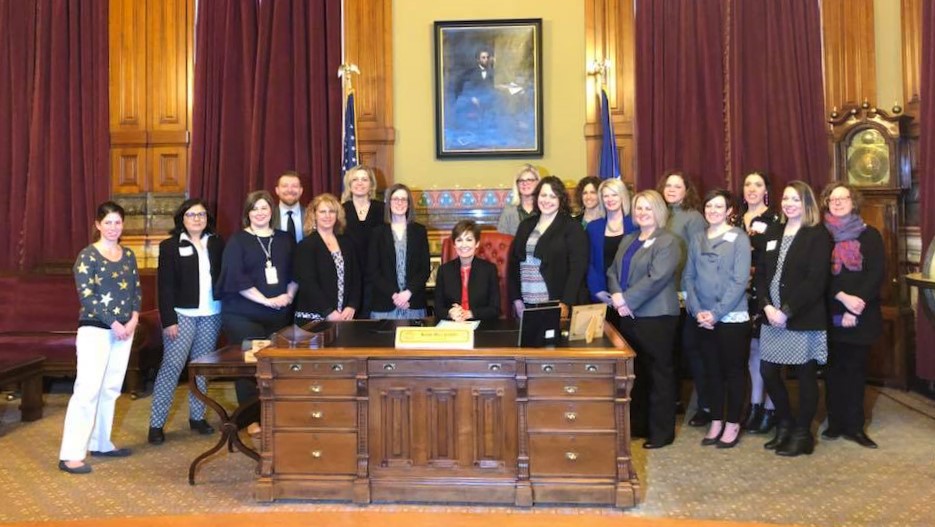 “That common messaging hit home. We were all on the same page,” says Yeast. The bill—which requires Iowa counties to implement a coordinated array of preventive, diagnostic and treatment services for children, and calls for parents of children with mental health issues to have a voice in designing those services—passed the legislature in April and was signed by the state’s governor in May.

“That was a huge win in terms of collaboration,” says Yeast. It was also a clear example of the power cross-sector networks can wield when members move beyond their own silos to support a shared goal. Such work is not easy—“it takes a lot of time and effort to continually nurture those relationships and connections,” says Yeast—but it is essential to making long-term, systemic change.

That’s been the ambition of Iowa ACEs 360 since its start, when a small group of stakeholders—in public health, mental health, family support and community advocacy—gathered, with the support of the Mid-Iowa Health Foundation (MIHF), to discuss the original ACE Study and how their work needed to change in response.

That group decided on two priorities: collect Iowa ACE data and spread awareness of the ACE study, so others could be galvanized by its findings on the lifelong, corrosive effects of early childhood adversity.

An early step was to include the ACE module in Iowa’s Behavioral Risk Factor Surveillance System (BRFSS); meantime, Rob Anda, the co-investigator of the 1998 ACE Study, and Laura Porter, a nationally known expert on ACEs and population health, spoke to 800 people at a 2012 Iowa ACE Summit. A year earlier, Anda had presented to a smaller group and held meetings with Iowa government agencies and key stakeholders.

Suzanne Mineck, president of MIHF and one of the original committee members who launched ACEs 360, says “water cooler conversations” in the weeks following Anda’s visits that gave the work momentum. “We all had the privilege of learning about compelling research, but it was the lingering impact, both on those in decision-making places and those on the front lines, that was as much of an ‘aha.’”

As the coalition grew, hosting quarterly learning circles, developing work groups and, in 2014, acquiring a part-time program manager, it became a place where people from various sectors—juvenile justice, child welfare, health care and education—could learn together. “It created a culture where there wasn’t a singular response…a culture of transparency, humility, honoring and supporting risk-taking,” says Mineck. “Many felt they were learning things for the first time together.”

That was the case for Christine Her, executive director of ArtForce Iowa, which helps youth transform their lives through art. “We got involved with Iowa ACEs 360 because we learned about the ACE Study. It was eye-opening for all of us. We started training all the adults who worked in our programs. We said, ‘We’re going to integrate all our art workshops through the lens of trauma-informed care.’”

Today, the coalition continues to focus on the big picture—systems change rather than direct service, policy rather than individual programs. Backbone support provided by both MIHF and United Way of Central Iowa has been key, along with having “someone at the end of the day whose job is cultivating a network and finding places for people to be engaged,” Mineck says. Now, group members are starting to see indications of their work’s impact at the highest levels.

Eight years ago, says Iowa ACEs 360 program manager Lisa Cushatt, elected officials and even some advocates had a hard time explaining ACEs and their effect on individuals’ lives. “Last year, I got texts from members of our policy coalition in the middle of a legislative floor debate, saying, ‘This representative just said ACEs in her floor comments and used the term correctly!’ And we had an actual bill pass on establishing a children’s mental health system.

“The pace of change is slow when you’re doing systems work,” Cushatt says. “In our policy coalition, we say: We’re here to do together what none of us can do alone.”

In this Article:
8/20/2019
How
Coalition Building
Communication
Policy & Advocacy
Where
State
Communities
Iowa
Advisors
Laura Porter
Back to Tools