A Tree Grows in Tarpon

The town of Dunedin claimed the Florida orange as its symbol. Safety Harbor had the grapefruit. But when members of the Peace4Tarpon marketing team were trying to design a new poster, the group’s vice-chair, Mary Sharrow, suggested another image of native flora: the red mangrove. 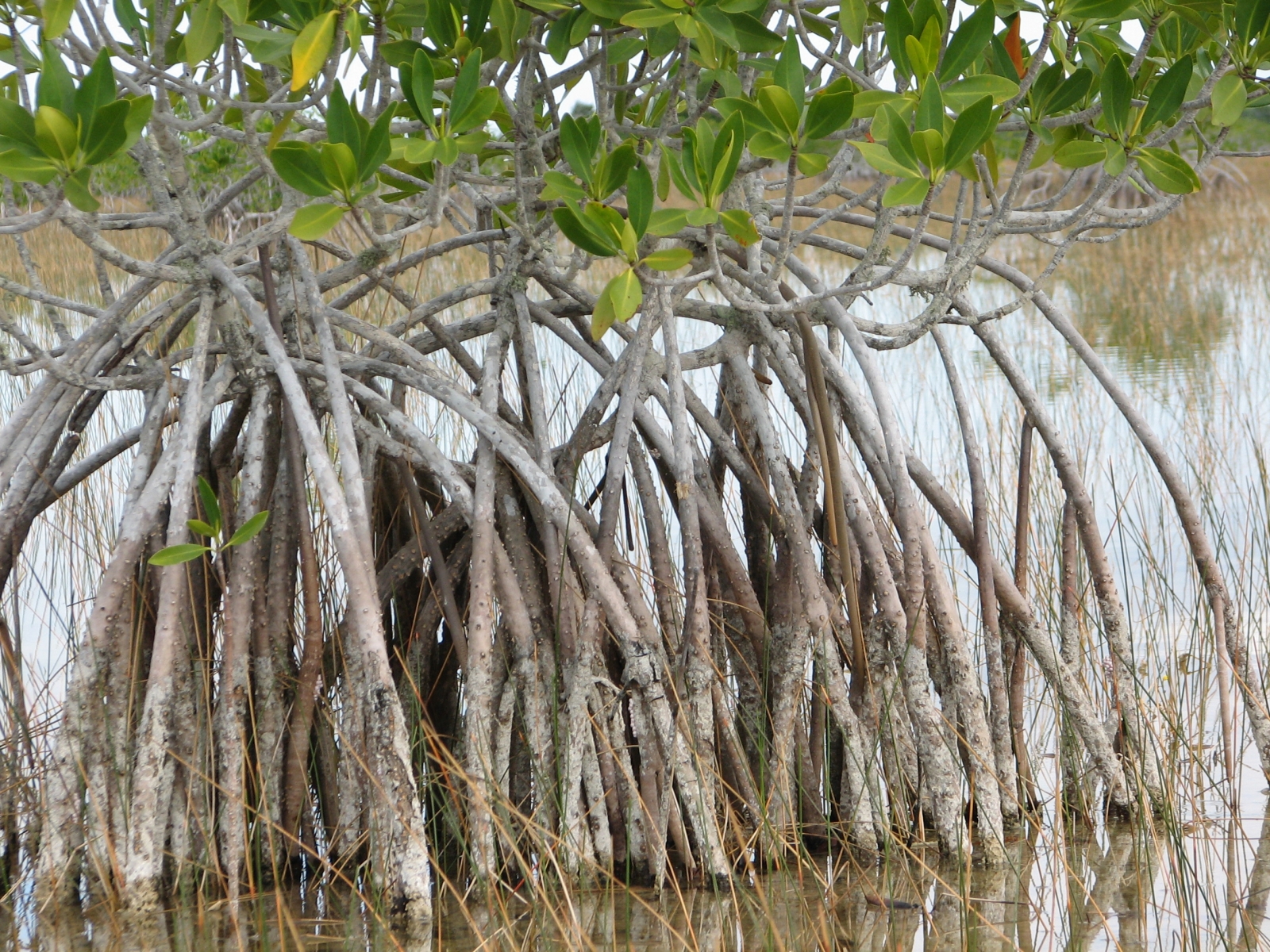 Those trees, known officially as Rhizophora mangle and colloquially as “walking trees,” populate Tarpon’s shoreline. At first, marketing team members were unsure about using them as Peace4Tarpon’s symbol. Then Sharrow came back with a bundle of research.

“When I started reading about [the red mangrove], it blew me away,” she says. She learned that the trees rebuild shoreline, protect sea grasses and reefs and convert salt water to fresh water in their root systems. “The capacity of the mangrove to survive in the harshest of environments…these are work mules, giving you free carbon-scrubbing. The Smithsonian had a blurb: ‘The mangrove is a survivor.’ It resonated on so many levels.”

Artist Kris Gregg, a graphic designer and member of the marketing team, designed an image of the tree that could be used on posters, brochures and window decals. But Peace4Tarpon leaders wanted to go further: Why not make the red mangrove the official tree of Tarpon Springs?

The red mangrove is not only a metaphor of health and vibrancy but an example of how a home-grown resilience movement can capture local assets and symbols to raise awareness.

“It’s another way to brand the city as desirable, as healthy, as vibrant,” says Robin Saenger, founder of Peace4Tarpon.

“The tree is able to bounce back. It’s indigenous to this area,” says Wendy Sedlacek, MARC project manager. “We thought it was a beautiful metaphor that represents Tarpon Springs.” 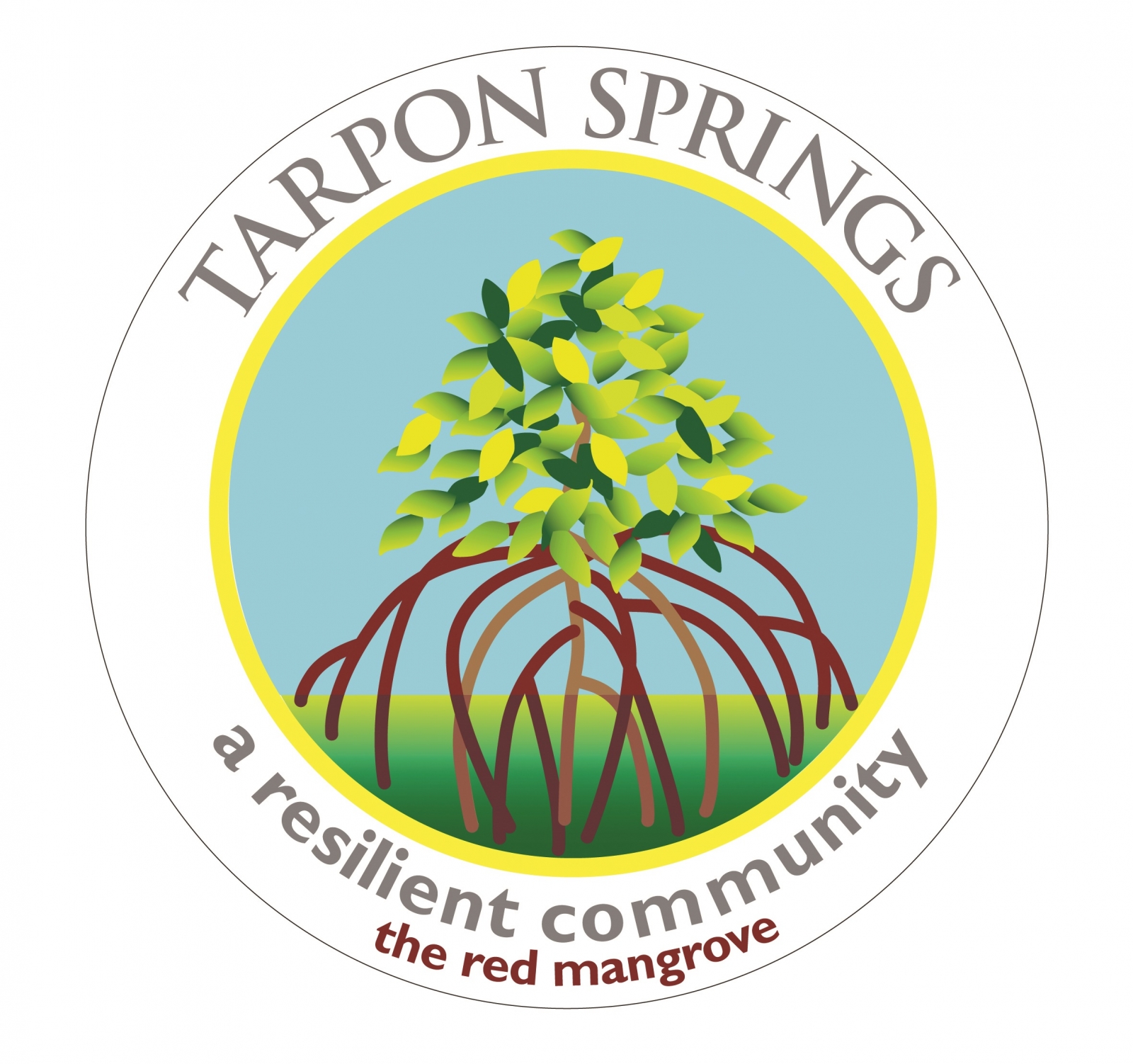 Saenger brought the idea, along with a large, high-resolution image of the red mangrove graphic, to Tarpon’s city commissioners in October 2016. They were intrigued, but wanted more support from community organizations.

So Saenger reached out to local civic and environmental groups—the Suncoast Sierra Club, the Garden Club—as well as individual business owners, faith leaders and community members, for letters of support.

When she returned to the city commissioners’ meeting two months later, they passed a unanimous resolution making the red mangrove the city tree of Tarpon Springs.

“The red mangrove is a survivor,” says city manager Mark LeCouris, a 30-year veteran of the police department. “That plant thrives when all other plants might fail. You will not find anything better to represent us.” 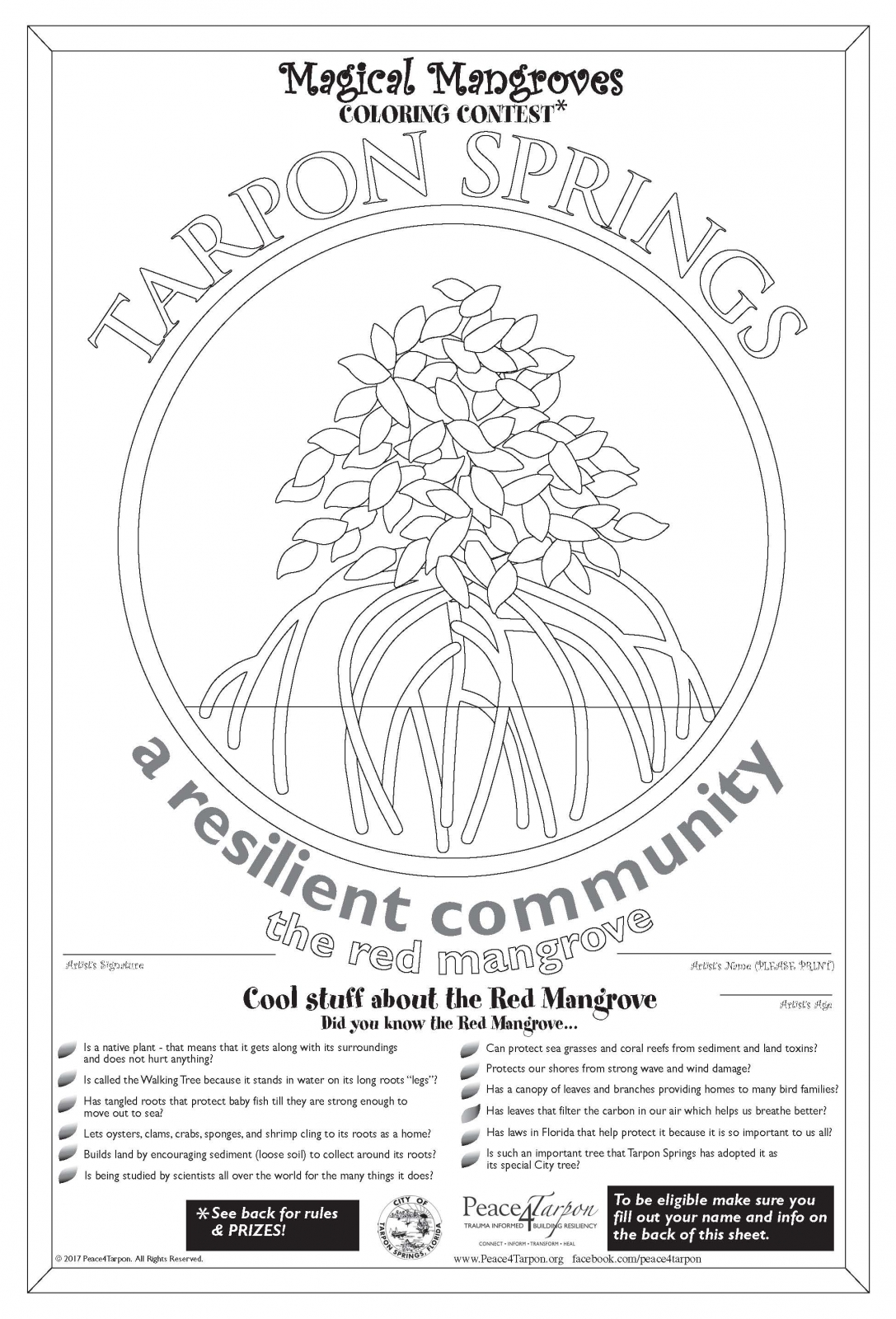 Though Peace4Tarpon has big visions for the red mangrove symbol—perhaps it could be painted on the wall of a meditation garden near the tennis courts—members agreed to start small, with “The Magical Mangroves Coloring Contest,” a color-in red mangrove poster, with information about resilience, that kids could design and personalize. With the mayor acting as one of the judges, the winners in various age categories received prizes, and the library displayed all the entries.

For Peace4Tarpon leaders, the red mangrove is not only a metaphor of health and vibrancy but an example of how a home-grown resilience movement can capture local assets and symbols to raise awareness.

Saenger receives several calls a week from communities asking how they can start their own “Peace4” trauma-informed initiatives, and similar efforts have launched in the city of Gainesville, the Big Bend Region of Florida, Crawford County in Pennsylvania and elsewhere.

“When I present to communities, quite often I’ll share the red mangrove story, but I’ll say, ‘It’s important for you to think through what would be a good brand for your city. What is an asset; what symbol would you want to represent you?’”

“This is not a cookie-cutter type of movement,” adds Sedlacek. “It’s something that will be unique for every single community.” Both leaders encourage those in other locales to reach wide, involving educators, city government, health care providers, faith-based organizations, businesses and social service agencies in their efforts.

Meantime, there’s a red mangrove decal on the windshield of Saenger’s car. The image appears on postcards that go into Peace4Tarpon information packets. And on rough days in the city manager’s realm, LeCouris will glance at his red mangrove poster and let it remind him of strength and possibility.

“Sometimes you get frustrated,” he says. “[The image] helps bring me back to where I should be. I have [the poster] in my office, right in front of me every day I work.”

Trauma recovery a community responsibility
Herald-Tribune, September 6, 2018
The Bus Ride To Knowledge Is A Bus Ride To Success! Where Is Your Bus Going?
The Orlando Times, May 5, 2018
Let's make life better for kids: No more trauma
Orlando Sentinel, March 23, 2018
All Related Press