2016: Connecting the Dots, Finding the Do-ers

When Tina Eblen and Todd Garrison led an ACE training at the Fort Peck Reservation, home to the Assiniboine and Sioux Tribes, they heard stories of “gut-wrenching” trauma so pervasive it seemed commonplace.

“Some people told us, when they were taking the ACE questionnaire, ‘Gosh, I thought these things were just normal,’” says Eblen, MARC coordinator for Elevate Montana, an ACE-informed statewide initiative launched in 2013 by the ChildWise Institute, a non-profit that focuses on child well-being.

Elevate Montana offered to train school staff in Fort Peck. The invitation was avidly embraced by the new superintendent in Brockton, a tiny community within reservation boundaries. This response convinced Eblen and Garrison, executive director of ChildWise Institute, that this area was ripe for change.

“The superintendent is gung-ho with ACEs and becoming trauma-informed,” Eblen says. “She talked about incorporating ACEs knowledge into one of the high school classes. She walked into this community and went to every household and introduced herself. She said, ‘The kids need respect from us in order to learn how to respect others.’”

This sprawling, sparsely populated state ranked 47th in child health in 2016; one in five children live below the poverty level. Finding local champions has been key to Elevate Montana’s mission. So far, five communities have signed on as affiliates, meaning they identify a backbone organization and commit to raising ACE-and-resilience awareness on the local level.

The latest to join was Bitterroot, in the southwestern part of the state, which held an August ACEs conference, then launched a book discussion group; the first title is The Nurture Effect, How the Science of Human Behavior Can Improve Our Lives & Our World, by Anthony Biglan.

United Way of Flathead, Lake, Lincoln, Glacier & Sanders Counties embraced Elevate Montana as the focus of a year-long campaign. In Kalispell, members of the drug task force as well as NICU providers at the medical center have become enthusiastic partners. And in Helena, a 7 a.m. training last summer brought together CEOs, community members and philanthropists, along with the sheriff of Lewis and Clark County. Several years earlier, Eblen says, the sheriff attended an ACEs training and was unfazed. “Now he requested that all his staff be trained. It was a huge breakthrough,” she says. “The more people start to hear about ACEs, the more it starts to resonate.”

Eblen has noticed a common trajectory in the communities where Elevate Montana works: first, people experience a personal “aha,” reflecting on their own experiences and the ways they view other people’s behavior. “Then they start to transform how they deliver care,” she says. “It’s been very interesting to see people come forward and say, ‘This has really changed my outlook on life,’ to embrace that and then ask, ‘What do I do now?’” 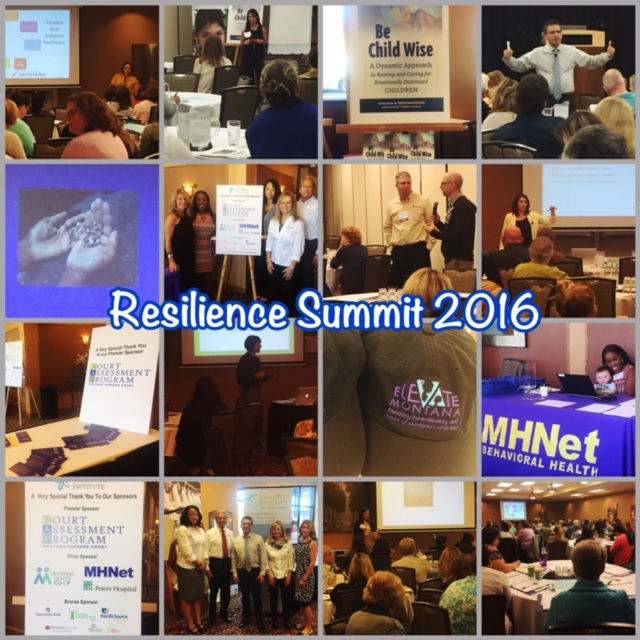 After four ACE summits—the most recent, in September, featured a day-long seminar with Philadelphia pediatrician Kenneth Ginsburg titled “Our Kids Are Not Broken,” along with workshops for health care providers, faith-based organizations, Native American communities, mental health/child care professionals, juvenile justice/law enforcement personnel, and educators/parents—thousands of people in Montana have been exposed to the science of understanding and mitigating ACEs.

The network includes partners ranging from the Montana Board of Crime Control and the Department of Corrections to Blue Cross Blue Shield and the Montana Children’s Trust Fund; sponsors of the recent summit included banks, health insurance companies, hospitals and the Court Assessment Program of the Montana Supreme Court. More than a dozen master trainers, working with ChildWise Institute and ACE Interface, conduct workshops around the state.

Now it’s time, Eblen says, to “go beyond ACE-awareness.” She will make subsequent visits to Brockton to work with the school superintendent; she’s setting up training—and, she hopes, a screening of “Paper Tigers”—for staff at Kalispell Regional Medical Center. “We are creating a ‘next steps’ presentation to help individuals and organizations [that are asking] ‘What do I do now?’”

In the first year of the MARC grant, Elevate Montana has seen some unexpected partners join the conversation. One is the business community—specifically, a McDonald’s franchise owner in Helena who invited Elevate Montana leaders to do a four-hour trauma-informed training with her managers this fall. Using surveys conducted before and after the training, Elevate Montana will try to assess whether trauma-informed education has a measurable impact at McDonald’s—in the form of decreased turnover, reduced health insurance claims or higher rates of employee satisfaction.

Eblen would like to see more health care providers active in the network, along with law enforcement and juvenile justice officials. Many in the state cling to an individualistic, “pull yourself up by your bootstraps” attitude, Eblen says, though “that is slowly changing as people start to look with more compassion, [asking] ‘How can we prevent that in the future? How can we assist this person?’”

Schools have been another challenge; while some smaller districts have signed up for all-staff trainings, including bus drivers and kitchen workers, the larger districts in Helena and Missoula have proven more unwieldy.

And even in smaller communities such as Fort Peck, Eblen has found it difficult to bring disparate groups together, especially when geographic distance and cultural differences intercede. “We live seven hours away; how do we maintain a presence there?” she says. A recent tragedy—a two-year-old was murdered on the reservation—jarred many in Fort Peck into recognizing the impact of trauma; still, “We had all these different groups contacting us, but no one was talking to each other. We were trying to connect the dots.”

Patience is key, Eblen says. “It takes time. And it takes really developing relationships. I can’t stress enough how it’s about meeting the right people and making those connections to the people who are do-ers in the community, the person who’s going to do the things that need to be done to move that community forward.”