A recent edition of the Vital Village Community Engagement Network e-newsletter featured a video of a father/daughter beat-boxing duo; the energetic pair mesmerized a TedYouth audience while reminiscing about “when you used to beat-box me to sleep.”

In addition to the video from its monthly “Praising Parents” section, the newsletter also held details of upcoming network meetings, a training opportunity with the Social Justice Mediation Institute, events hosted by network partners and “The Scoop on Stats,” another regular feature that, this time, used a graphic to show the difference between positive, tolerable and toxic stress.

The monthly newsletter captures Vital Village’s vision and approach: to cultivate collective responsibility for all children through a network of residents and agencies across three of Boston’s poorest neighborhoods. With the support of the Mobilizing Action for Resilient Communities (MARC) grant, the network devoted much of the past year to gathering, sharing and reflecting on data to advance that mission.

“It was huge for us to be able to get a data coordinator and have funding to do this bit of work that had not had direct funding before,” said Renée Boynton-Jarrett, a pediatrician at Boston Medical Center and founding director of the Vital Village Network.

Boynton-Jarrett and other network leaders wanted to handle data differently; rather than gathering information from community members who often feel “over-studied,” only to have that data melt into a rarely-read report, they wanted to use data as a catalyst for discussion, understanding and change.

The network created “data postcards” that included one or two specific findings—for instance, a seemingly contradictory survey result indicating that many respondents felt they lived in a supportive neighborhood but only a few said they could reach out to a neighbor for emergency child care. Then team members took those postcards to clinic waiting rooms and community centers and discussed them with parents.

“We learned that some people would only ask family members to help with child care,” Boynton-Jarrett said. Pride and language differences were another barrier. “The goal was not just to feed back data, but to feed it back in a way that allowed us to discuss it, to see if people disagreed. Our goal was really to engage people.”

The network recently launched a “data dashboard,” an online compendium of information about schools, crime, population and resources that can be used to raise awareness, advocate for change or explore why certain neighborhoods seem to have worse outcomes than others. In developing the dashboard, network leaders looked not only at the “footprints” of neighborhoods as community members defined them, but also at the connections between neighborhoods—the corridors of social interaction, commerce and information that could be used to share knowledge about resilience and boost the network’s overall capacity.

In the spring of 2016, Vital Village also conducted a large, qualitative study of 25 of its community partners, along with in-depth surveys of nearly 40 partners—a diverse network that includes the Boston Children’s Museum, Boston Housing Authority, the police department and public schools as well as community health centers and residents’ associations.

“We were trying to see…if we were really meeting our goals as a network,” Boynton-Jarrett said. “We were looking at the extent to which partners’ staff were using trauma-informed strategies and ways they felt support from us. Over 90% of people said, ‘Yes, I’ve made meaningful new collaborations’” that range from co-writing a grant, co-locating programming or helping with outreach for another partner’s program. 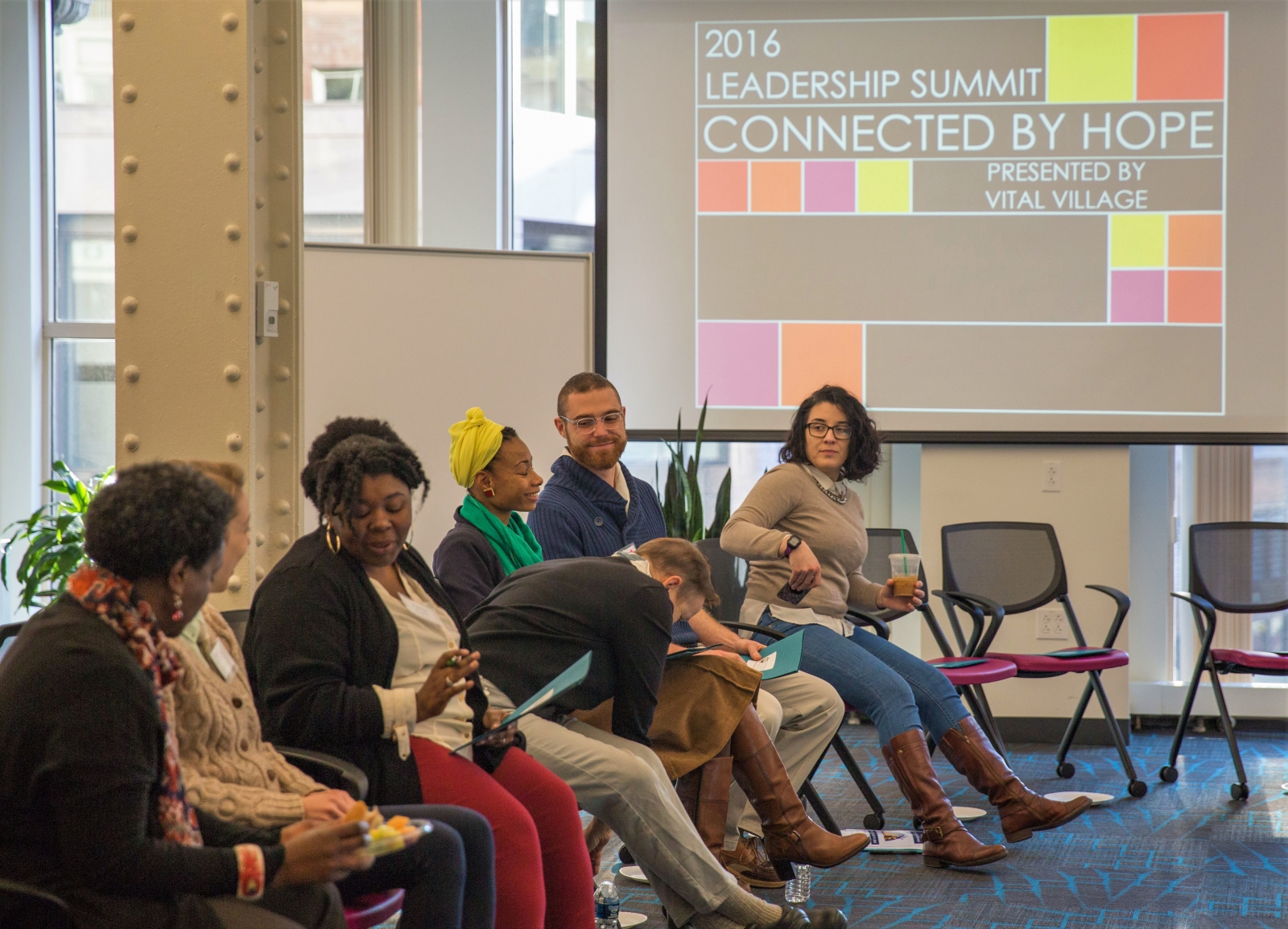 “There’s still a lot of room for growth,” Boynton-Jarrett said. “How do we scale up to reach more people in more areas? Is it a train-the-trainer model? How does that actually happen?”

Vital Village’s emphatically inclusive approach requires a turn-around from leaders who may be accustomed to agency-speak and conventional ways of structuring meetings. In a June blogpost, Vital Village staff members Kymberly Byrd and Morgan Brockington wrote about the challenge of co-designing a leadership summit—an approach that “demands a more fluid interpretation of the word ‘expert’ and recognizes that lived experiences are often more valuable than degrees and research publications.”

As the network has grown—it now numbers more than 75 community-based partners and over 150 active participants—it’s been a challenge to simply keep up with new interest and connections, Boynton-Jarrett said. “And we continue to be curious about what it would be like to have more partners in the business community.” She said the network would also welcome more opportunities for cross-site exchange with other MARC localities.

On the slate for the second year of the MARC project is the provision of more of the supports that build capacity among residents: trainings in conflict resolution, collaborative leadership, evaluation and meaningful use of data. Vital Village is working with ten Boston public schools on incorporating trauma-informed approaches. In September, the network launched five new drop-in breastfeeding groups, including the first Boston hospital-based “Baby Café,” where families can get support for breastfeeding, connect with other new parents and learn about social-emotional development. The network will continue to focus on three major areas: the prenatal and early-childhood period, schools and peer-to-peer advocacy.

But the ongoing mission is to further the work of resilience-building in a way that is equitable, participatory and collaborative. “At the end of the day,” said Boynton-Jarrett, “the place that needs the most reinforcement…is creating space to build trust, listening to community members with lived experience, not just inviting people to a table but thinking about what authentic partnership looks like.”