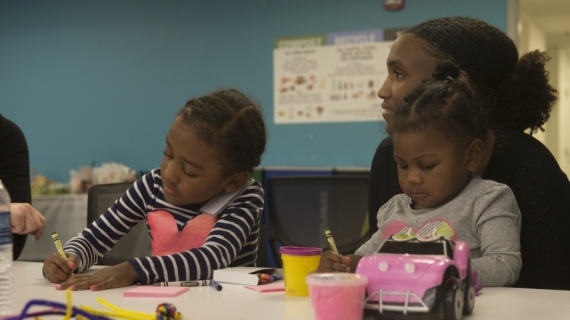 In the spring of 2016, Vital Village conducted a large, qualitative study of 25 of its community partners, along with in-depth surveys of nearly 40 partners—a diverse network that includes the Boston Children’s Museum, Boston Housing Authority, the police department and public schools as well as community health centers and residents’ associations.

“We were trying to see…if we were really meeting our goals as a network,” Boynton-Jarrett said. “We were looking at the extent to which partners’ staff were using trauma-informed strategies and ways they felt support from us. Over 90% of people said, ‘Yes, I’ve made meaningful new collaborations’” that range from co-writing a grant, co-locating programming or helping with outreach for another partner’s program.

“There’s still a lot of room for growth,” Boynton-Jarrett said. “How do we scale up to reach more people in more areas? Is it a train-the-trainer model? How does that actually happen?”

Vital Village’s emphatically inclusive approach requires a turn-around from leaders who may be accustomed to agency-speak and conventional ways of structuring meetings.

Pediatrician Renée Boynton-Jarrett was working with young women in Trenton who had become pregnant as teenagers when she understood how poverty, food insecurity, violence, substandard housing and inadequate schools exacted a constant, toxic toll on people’s lives.

“It became profoundly evident to me that there’s a portion of humanity that experiences a chronic, insidious, daily violence and associated high levels of stress,” she said. From that awareness grew curiosity: How do such stresses affect biology and physiology, behavior and the ability to learn? “There was, over time, mounting evidence that adverse experiences in early life have a long-term cost. I became interested in what work we could do to turn the tide.”

In 2010, Boynton-Jarrett, by then an associate professor of pediatrics at Boston Medical Center, led a multidisciplinary group of practitioners interested in health inequities and early childhood adversities. That group gathered community residents and organizations in a series of conversations about child health and well-being; from that, the Vital Village Community Engagement Network was born.